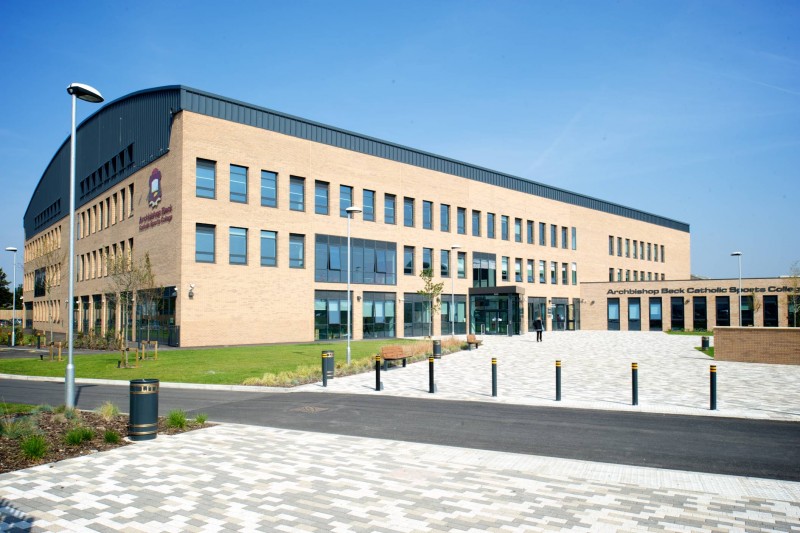 Archbishop Beck is the second new school completed by the company for Liverpool City Council under the Scape framework, with Notre Dame Catholic College opening in 2013.

Around 70 per cent of Archbishop Beck’s budget was spent with firms in the region, including contracts for mechanical and electrical engineering, tiling, fencing, joinery, painting and decorating (see case study below).

It is the latest in the Liverpool Schools Investment Programme, devised as a follow-up after the Government halted Wave Six of Liverpool’s Building Schools for the Future (BSF) project.

The new school features a sports hall with six courts, a 3G pitch, a theatre and recording and dance studios. Mayor Joe Anderson said: “The new Archbishop Beck Catholic Sports College is a fantastic facility which will provide thousands of young people with education in great surroundings.

“I am pleased so many of the subcontracts were awarded to Liverpool firms, meaning that we have been able to recycle millions of pounds back into the city’s economy. It is also good to see Willmott Dixon have been training the tradespeople of tomorrow by employing apprentices as part of this scheme.” 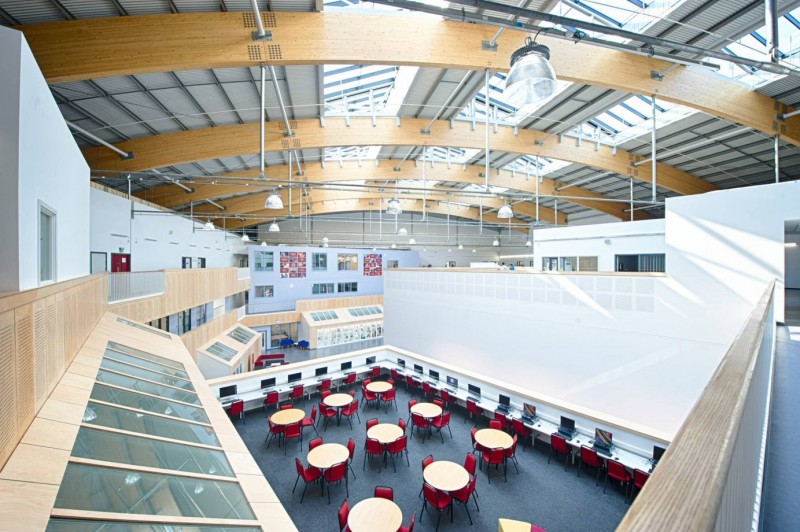 The council’s employment and skills team, Liverpool in Work, has helped Willmott Dixon access a local workforce, apprentices and the local supply chain on the schools they are building. Almost 80 per cent of the 300 people who worked on Archbishop Beck are from Liverpool or the wider Liverpool City Region, and 27 apprentices also worked on the site.

Head teacher Paul Dickinson said: “This is an outstanding new college campus that will benefit all the students and the wider community of north Liverpool. We have been very fortunate to work with two excellent companies, architects Shepherd Robson and Willmott Dixon.

Councillor Jane Corbett, Cabinet member for education, said: “I am so pleased that the pupils and staff at Archbishop Beck have finally got the new school that they have dreamed about for so long. It is enabling them to deliver a first class curriculum in modern surroundings which are suited to today’s teaching methods.”

Anthony Dillon, managing director for Willmott Dixon in the North West said: “We’re very proud of what we have created with Archbishop Beck, which comes just over a year after we handed over Notre Dame, another brilliant new school for Liverpool. As with Notre Dame Catholic College, a key focus was supporting local jobs and companies and I’m pleased to say building Archbishop Beck gave another major boost with 70 per cent of the gross development value spent in the local economy and supply chain. It will be the same approach with Archbishop Blanch, where we are on site now.”

A&B Engineering in Old Swan won the contract for the mechanical, electrical and plumbing contract at Archbishop Beck.

Mike Hart from the firm said: “The appointment by Willmott Dixon for us to carry out the supply and installation of the complete Mechanical, Electrical and Plumbing Services on this fantastic new school was tremendous news for us all here at A&B.

“Not only did it give us the opportunity to deploy many of our directly employed fitters, plumbers and electricians, it also, due to the increased business optimism, allowed us to take on eight new local apprentices who will train with us over the next four years. Winning the contract has also given us the confidence to refurbish our own building in Old Swan and replace our company vehicles and we have used local firms to supply and carry out this work.

“Another factor is the early payments we received throughout this project that allowed us to pass down these payments to our own supply chain, which greatly helps these smaller businesses with much improved cash flow