I am passionate about reducing the amount of plastic waste we consume as a society.

Having the ability to influence our impact on the environment was the main reason I became an environmental manager. It allows me to take a lead in managing the reduction of construction waste and in particular how we can reduce our plastic waste.

Tackling plastic waste is a must for our society. I wanted to play my part by looking at how we could take what is traditionally non-recyclable plastic waste from our projects and reuse it.

My research found a way to do this. I discovered a product that takes non-recyclable waste plastic, processes it and uses it to replace carbon intensive bitumen in roads. I knew immediately we could trial this on the Ashton Rise housing development for Bristol City Council. This made sense given the shared sustainability goals of both organisations.

Making this work meant segregating non-recyclable plastic waste from the project, then getting it converted into a bitumen replacement product so we could use it in the construction of a road where the plastic waste originated from. This also met the principle I believe in of a “circular economy” where waste is not thrown out, but rather repurposed into a material that can be reused.

If implemented, the equivalent of 150,000 single used plastic bags would be reused, while also preventing 1.6 tonnes of carbon entering the atmosphere. The concept had a lot of support from the customer, project team and surfacing supply chain partner.

However, many questions still had to be answered before implementing the new product. 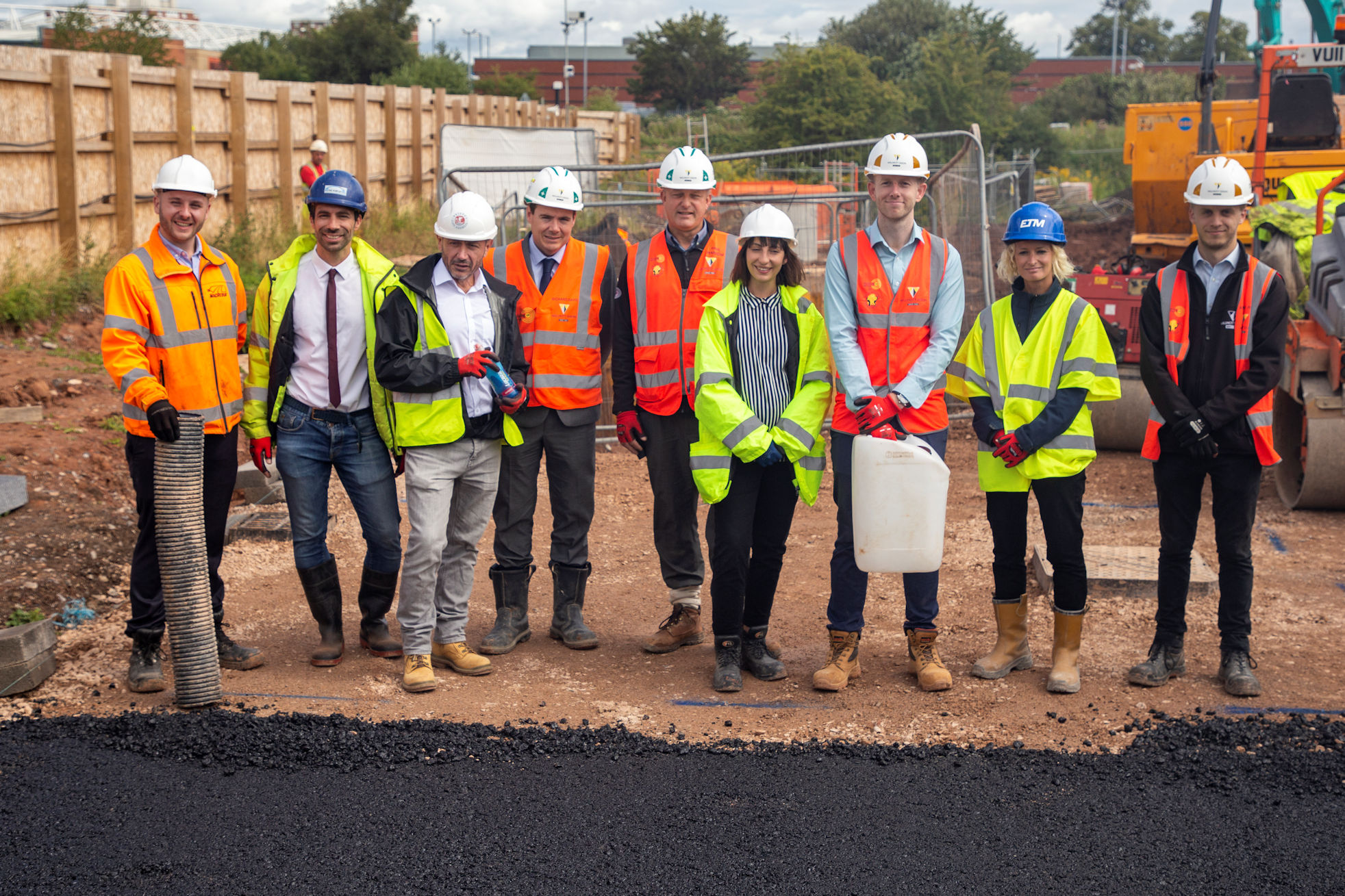 Turning the concept into reality was a real challenge. While everyone involved in the project felt the idea was good, when it came to implementation there were many concerns, namely: would this new product be as good as the tried and tested traditional tarmac?

Tarmac has been made the same way for decades and the asphalt plants were hesitant to try a new plastic product. Finding an asphalt plant that would even consider using the plastic product took two months! The challenges in convincing people to take a chance on new approaches are not unfamiliar when trying to implement new sustainable ideas.

Negotiations happened right up until the day before the plastic road was due to be laid but after facilitating the frantic negotiation of all parties involved, an agreement was made and 170TN of recycled plastic road was finally laid!

All possible in four months

It took four months from initial idea to laying the plastic tarmac. It was very rewarding to be part of this environmental first for Willmott Dixon, it was a team effort to implement. This initiative is a great example of the journey we need to go on to deliver more sustainable solutions for our customers. We can only deliver initiatives like this if we have a strong and trusting relationship between all parties and it is a great example of the journey we will need to go on together in order to challenge the status quo.

So what is the biggest lesson I have learnt?

Don’t take no for an answer, have courage, and if it is the right solution, you will get there in the end!

This waste plastic material has now been used on over 800 roads in the UK mainly in the north east of England.

Starting in 2016 on small schemes in Cumbria repairing damage of storm Desmond, it was used in 2019 on the A689 dual carriageway. In 2017, Carlisle airport had their taxiway and runway paved with this material.

We take plastic waste out of green bins (less than 30% of plastic waste is recycled) and instead of burning or burying this valuable material, we mix it with an activator. This activator bonds at one end with plastic and the other with bitumen, creating a WPMB (Waste Polymer Modified Bitumen).

Asphalt roads can continuously be recycled, meaning we have created a closed loop whereby this material is locked in our roads indefinitely. We have had to make sure that this assumption rings true and have had to do a lot of testing to make sure that as cars, buses and HGVs roll over the surface we have not got plastic coming out into the soil and watercourses; we have categorical evidence that this is not the case. Far worse to have these plastics burned into the atmosphere, or dumped indefinitely underground where they leech out into the soil and water courses…..or even worse than those two options, plastic waste being dumped directly into rivers and seas.