Rick Willmott is our Group Chief Executive and represents the fifth generation of the Willmott family to lead our company since we were established in 1852.

Rick joined in 1982 as a project management trainee were he gained experienced working at operational level on a series of projects. In 1993 he was seconded on the government’s Construction Sponsorship Directorate with the remit of promoting UK Construction and consultancy within the wider European community in a joint initiative with the DTI.

Rick was appointed Chief Executive in 2008 and leads a company employing nearly 2,200 people with a turnover approaching £1.2 billion in 2020.

An issue of personal importance, Rick wanted the company to lead by example in being a sustainable business and as a result, we have been carbon neutral since 2012. In fact, Rick has overseen a reduction in our carbon emissions relative to turnover by 57% compared with 2010 emissions. In 2020, our Now or Never strategy set a target for Willmott Dixon to be a net zero carbon business by 2030.

Rick is passionate that Willmott Dixon has a 'purpose beyond profit' and set up the Willmott Dixon Foundation over ten years ago to help people from disadvantaged backgrounds to achieve their potential. He said:

"When you scratch below the surface in the communities where we work, the level of deprivation is staggering. Big business has a duty to assist and make that more of its purpose."

Trying to make a difference has seen the company invest over £10m in community projects and help nearly 10,000 people improve their life chances - something that led to Willmott Dixon winning a Queen's Award for Enterprise for Promoting Opportunity in 2018.

Initiatives include Ready for the Gate, working with offenders at HM Prison Elmley (we opened a new dry lining academy there) and our Building Lives Academies - a ‘pop up’ academy concept that can move from site to site as projects complete.

Rick firmly believes that our supply chain partners should be paid promptly. We were the best performing major contractor in BuildUK's first ever list of payment times, compiled from data submitted under the Duty to Report on Payment Practices and Performance. It showed our average supply chain payment time was 33 days.

"We want our suppliers to reflect our values, which means, I hope, they pay their suppliers on time as well. It falls apart for everybody when people don’t play the game." 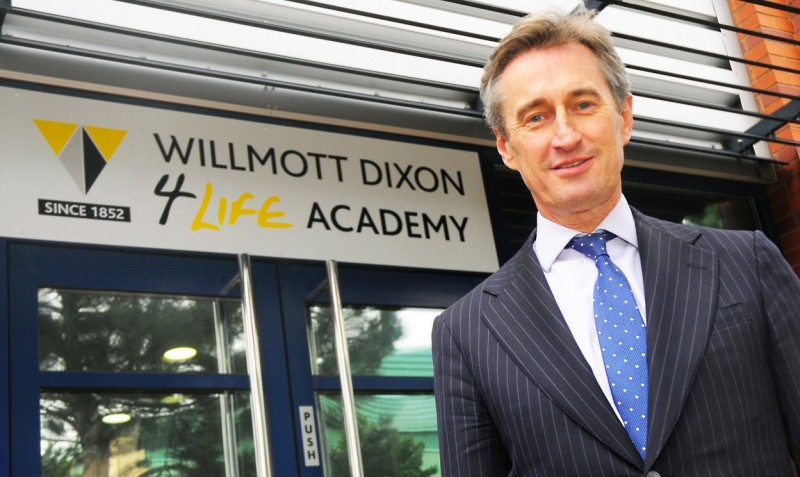 Our group structure reflects our business areas - contracting and interior fit-out, while development and property support is delivered by our sister companies

The Willmott Dixon main board of directors